Although I use many of the Azure services as part of my day job as a web developer, one I’ve never had the chance to use is their Internet of Things (IoT) offering. This post seeks to remedy that by creating a simulated IoT device then using it to send telemetry data to the Azure IoT hub.

The Azure IoT hub allows the provisioning and control of millions of IoT devices, as well as providing a central point to manage two-way secure communications between devices and other Azure services.

In order to test out the IoT hub we will follow these steps:

I used the Azure CLI to handle the creation of resources. If you don’t already have it installed, it is available here. After installing the CLI, install the IoT extensions by running the following command, which adds some additional commands for interacting with the Azure IoT services.

Create a new Resource Group and a new IoT Hub. Not all features of the IoT Hub are currently supported in all regions, so it it important to create the resource group in a region that offers all features. I normally create resources in the UK South region, but the Events feature of the IoT Hub is not currently available there. The nearest region offering all features is West Europe. The following commands create a new Resource Group called ‘iot’ in the West Europe region, then creates a new IoT Hub called ‘my-iot-hub’ in the Resource Group ‘iot’ using the free plan ‘f1’.

Then retrieve the connection string for the IoT Hub, which we will need later,

which will return something that looks something like this.

Before we create the client device, it is worthing installing the Azure Device Explorer. The Device Explorer makes it easy to generate a password that our device will use to connect to the Iot Hub. It will also allow us to monitor the Iot Hub for any messages received from our device.

then launch the Device Explorer. Connect to the Iot Hub by pasting the Iot Hub connection string from earlier into the “Iot Hub Connection String” box, and clicking the “Update” button on the Configuration tab.

We can then use the Device Explorer to generate a Shared Access Signature (SAS) token, part of which will be used as the password when connecting the device to the IoT Hub. To generate an SAS token, follow these steps 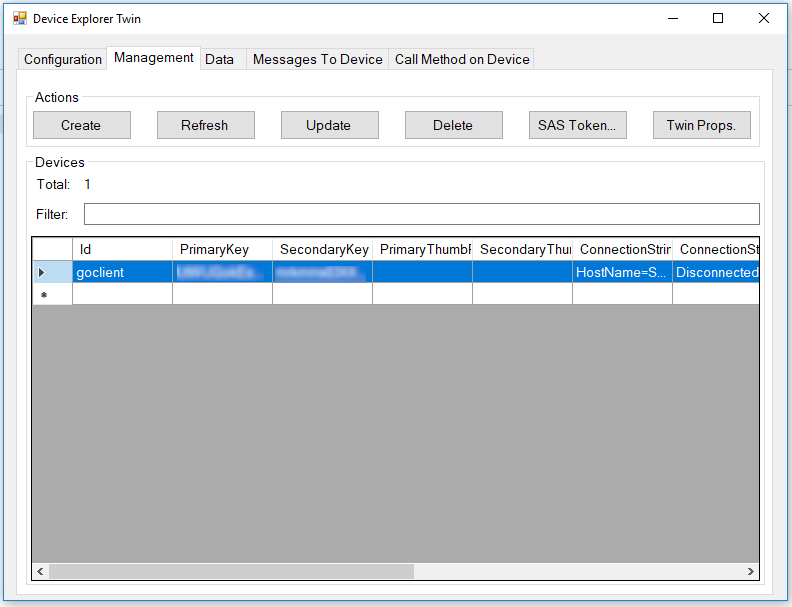 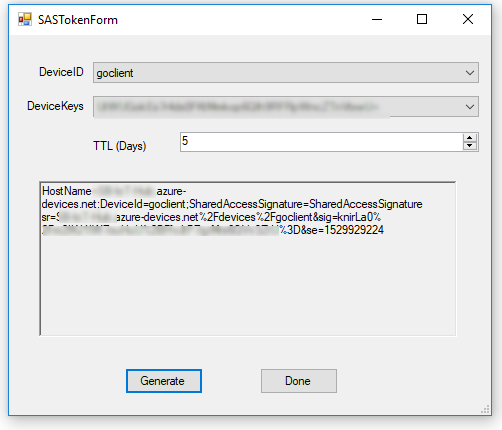 The client device will not be an actual physical device, but a simulated device written as a simple Go program. One of the things that helps keep this process simple is the robot abstraction implemented in the Gobot package, which allows us to define a piece of work for our device to perform repeatedly based on a time interval. It also offers an abstration over the MQTT protocol (based on the excellent MQTT package written by the Eclipse Foundation), which is used to communicate with the Iot Hub.

Using MQTT to connect to an Azure IoT Hub has several additional restrictions:

I’ve used environment variables to hold the values to be used for the username, password, hostname and device id needed to make the connection to the IoT hub, which take the following format:

and our device will send the message “hello” to the IoT Hub every 5 seconds. These messages will show up in the Device Explorer as in the following image 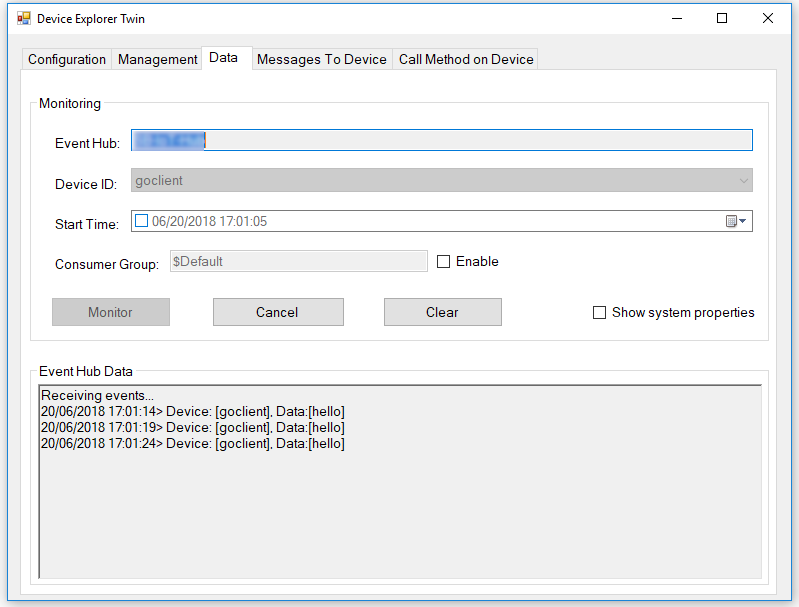 In the next post, I’ll take a look at routing device messages to Azure Functions, and then sending messages back to the device.